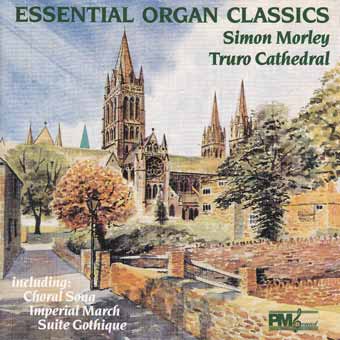 Born in Gloucestershire in 1964, he received his first organ lessons from John Belcher at St Peter's Church in Bournemouth, and was appointed to his first position as organist at the age of twelve. He became Assistant Organist of Wimborne Minster in 1983, where he gained his first exposure to the rich heritage of the Anglican choral tradition.

In 1986, he won a place at Trinity College of Music in London, where for four years he studied organ performance with Christopher Stokes at St Margaret's Church, Westminster. During his time at Trinity, he performed the Poulenc Organ Concerto with the Trinity College Symphony Orchestra, as well as giving numerous recitals in London and beyond. He was awarded the coveted Cardnell Organ Prize for organ performance, and was made a Fellow of the college in 1990. In 1988, Simon was appointed Organ Scholar of Westminster Abbey under Dr Martin Neary and Andrew Lumsden, a position which he held for two years, combining studies at Trinity with responsibilities at the Abbey, which included accompanying the Abbey Choir regularly for daily evensong, as well as taking part in many important national occasions for which the Abbey is well known. In 1990, Simon was appointed Assistant Organist of Truro Cathedral, a position he was to occupy for ten very happy years. As well as playing the organ for all statutory services, he accompanied the choir in numerous radio and television broadcasts, and appears as accompanist and director on many CD's recorded by the choir. He also recorded two solo CD's on the renowned Willis organ of Truro Cathedral, as well as finding time to teach at both Truro School, and Truro High School for Girls. He is a past president of the Cornwall Organists Association. In 2000, he moved to Lincoln Cathedral, one of the largest cathedrals in England, where he was asked to take primary responsibility for the Girl Choristers, who made their first BBC broadcast under his direction in 2001. Playing highlights included the distribution of the Royal Maundy (at both Truro and Lincoln) in the presence of Her Majesty the Queen, to whom Simon was presented after the service.
Simon Morley has given recitals on four continents, as well as performing the major organ concertos of Poulenc and Saint-Saens on many occasions, most recently with the Band of Her Majesty's Lifeguards. Recent playing engagements have taken him to South Africa, Switzerland, Austria and Italy (St Marks, Venice), and he was the first English organist to be invited to play in St Tropez, on the French Riviera.
He has recently overseen the restoration of the Casavant organ at St John's in Tampa, and has led the choir on three highly successful trips to San Francisco, Washington D.C and New York, where venues included Grace Cathedral, Washington National Cathedral and the Cathedral of St John the Divine.