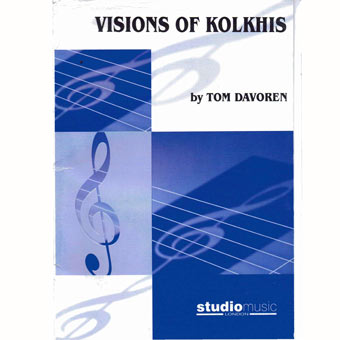 Visions of Kolkhis was commissioned by Jason Katsikaris and the Leyland Band as a finale for their appearance at the 2009 Brass in Concert Championship.

Inspired by Jason Katsikaros's Greek lineage, the subject of the work could be considered a metaphor for his impact on the British brass band scene, and the Leyland Band's commitment to striving for excellence.

Written in thee continuous sections, the work paints a vivid picture of the island of Kolkhis, a place instrumental in so many tales in Greek mythology. The music represents three individual stories; Jason and the Argonauts, the Golden Fleece, and the liberation of Prometheus by Hercules. However, musical material is drawn from the Leyland Band's signature march, Harold Moss's The Royal Tiger, named after the bus made by Leyland Vehicles in the 1950's.

Price reduced - This has been on a few trade stands and has been browsed!!