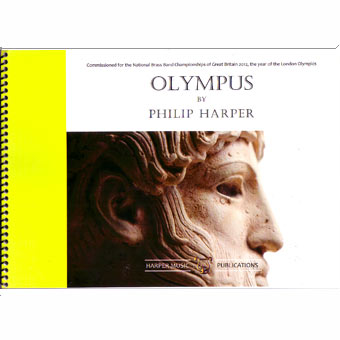 Olympus has been selected for the 2012 3rd Section Regional Qualifying round of the National Brass Band Championships.

Philip Harper has given this description of this piece:

The music begins with a depiction of the exciting Opening Ceremony where noisy fanfares and sudden swells add to the cosmopolitan flag-waving clamour. Without a break the music leads to The Chariot Race, a fast compound-time gallop with thundering hooves in the basses and percussion, and a heroic melody introduced by the tenor horns. Chariot racing was the main equestrian event in the Ancient Greek Games, which were founded in memory of King Oenomaus. In the Greek legend he suffered defeat in a chariot race to his son-in-law and Zeus's grandson, Pelops, but much of the music is bitter-sweet to symbolise the fact that Pelops had to cheat to win - drawing parallels with some of the issues still facing modern-day athletics.

A slow, mystical passage follows, describing The Temple of Zeus at Olympia. The statue of Zeus, who was honoured throughout the Ancient Games's history, was housed inside the temple and was one of the Seven Wonders of the Ancient World. The music depicts this period of the dawn of one of mankind's most ancient civilisations and there is a series of solo passages above a drone.

The next section is called The Olympic Flame and a broad and lyrical anthem-like melody develops slowly in the euphoniums, which gradually ascends until the horns can take it over before passing upwards again to the cornets (Higher). The music bursts into bright life at the lighting of the flame and the regular rhythmic pattern which has been established goes through an accelerando (Faster).

The final section is called The Olympic Truce and aims to capture the cooperative spirit of the ancient practice of ending wars for the duration of the games. The anthem-like melody makes an affirmatory return (Stronger) and the work ends as it began - with a blaze of colour and a real sense of optimism and global celebration.