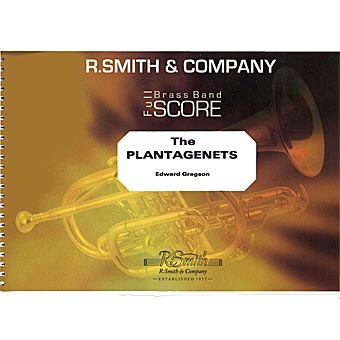 This is the Second Section Test Piece for the 2013 Regional British Brass Band Championships.

The Plantagenets is not intended to be programme music. lt rather tries to portray the mood and feelings of an Age - that of the House of Plantagenet,which lasted from the middle of the 12th century to the end of the 14th century.

To many It conjures up an Age of Chivalry and this is represented by fanfare motifs which occur throughout the work In varied form. The opening thematic figure, rising through the band in thirds,and followed by the fanfares, is important as nearly all the subsequent material is based upon it.

There follows two themes, the second of which is lyrical in style, and introduced by 'tutti' horns. In the long slow middle section a new theme is introduced by a solo horn (it recurs on cornet and euphonium in Canon) and is developed at some length. A lively fugato scherzino, however, leads to a recapitulation of the opening section music, and the work ends with a maestoso statement of the slow movement theme; a final reference to the fanfares ends the work.