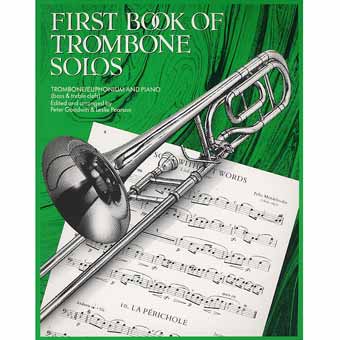 First Book Of Trombone Solos is designed to introduce the young trombonist to the experience of working with an accompanist at an early stage. The material in this book, which covers a wide range of composers, periods and styles, is arranged in increasing order of difficulty and corresponds to the Associated Board (UK) Grades 1-5. The pieces progressively introduce new technical and musical features.

The pieces in this book have been selected, edited and arranged for Trombone or Euphonium with Piano Accompaniment by Peter Goodwin and Leslie Pearson. The individual Trombone/Euphonium part, each piece being printed in both the treble and bass clefs, is also included on a separate insert.